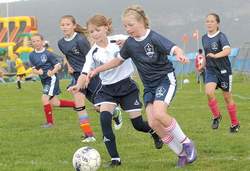 Maximum of 3 substitutes who may rotate during the entire game. The coach or parent is allowed to make substitutions while the ball is in play, but must wait until sub player has left the field.

Start of play and re-start after a goal

Pass forward to team mate from the middle of the half way line. All players must be in their own half of the field of play. Opponents must be at least 5m away from the ball until it is in play. The ball must touch a team mate before a goal can be scored.

Ball in and out of play:

The ball is out of play when it has wholly crossed the side line or the goal line or when play has been stopped by the instructing referee.

Ball crossing the side line

Throw-in: Players face the field of play.  Places both feet on or behind the line, uses both hands and delivers the ball from behind and over his or her head. The thrower must not touch the ball again until it has touched another player. Opponents must be at least 5m away from the ball until it is in play. A goal cannot be scored directly from a throw in.

Corner Kick. A goal may be scored directly from a corner kick.

A goal is scored when the whole ball crosses the line.

There is no offside.

Finals – no finals are played in this age group