In 1963, Neil Roff from Lismore moved to Moree and approached the Moree RSL sub-branch to support the foundation of an adults swimming club - the Moree Diggers Swimming Club. 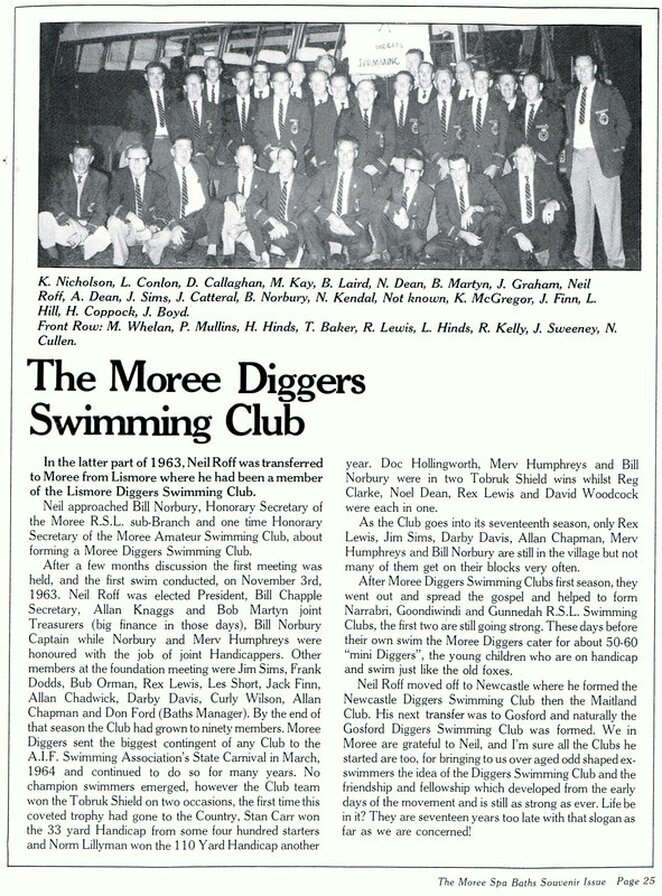 REX KELLY
The Rex Kelly swim is a freestyle brace relay partnership between an adult and a child.  It represents the relationship that Rex had with his children and celebrates swimming as a sport for families to enjoy.

Rex Kelly was a founding member of the Moree Diggers Swimming Club, as seen from the article above.  Each Sunday during the Summer they swam and as each of them had families, shared the love of the sport with their children.

JOHN FORD
The John Ford race a five member team made up of adult and intermediate competitors with four swimming 50m and one swimming 30m.

John Ford was taught to swim by Pat McGroder (Pool Manager) at the age of two.  As he got older, he would provide entertainment for the Tourists at the Spa Baths by diving for pennies.  John showed talent for breaststroke and was Australian Junior Champion, NSW Squad Champion and Representative, and was on the Melbourne Olympic Training Squad during the period 1956 -1958

After his swimming career, John returned to Moree to manage the Moree Spa Baths.  In 1963 John joined the NSW Police Force and served the community until his sudden death in March 1986.

VINCENT “VINNY” HEINRICH
The Vinny Heinrich race is a five member team made up of Tadpole and Mini competitors with four swimming 50m and one swimming 30m.

Vinny Heinrich swam with Moree Diggers Club from about 1971-2004. The Heinrich family came to Moree in 1929 and Vinnie’s father was the licensee of the Moree Hotel.  Living opposite the town pool, it was Vinnie’s and his brother Ted’s favourite place to be in their younger years, and Vinnie proved to be a very competitive swimmer.   They were both educated at Moree’s St John Henry Catholic School, and went to “Joeys” Sydney for high school and became talented Rugby Union players.  Vinnie’s rugby career highlights include playing for the Wallabies, NSW Representative and two tests for Australian International versing Fiji.  Vinnie returned to Moree in the late 1950s and worked as a Radiographer.  He also followed his father’s footsteps into local government as Councillor and Mayor.

KEN BERGER MEMORIAL TROPHY
The Ken Berger Memorial Trophy is presented to a Mini swimmer in the 30m pointscore award to encourage them to continue swim and participate in Diggers on a weekly basis – for it is then, the child will improve.

Ken Berger swam with Moree Diggers Club.  He enjoyed the atmosphere of the Club and loved seeing juniors improve each week. He would often say, ‘youth are the future of any club’.  He introduced his children to Diggers, and in turn his grandchildren.
Ken was always keen to assist with any functions and loved to travel to carnivals; one time, Ken even drove he's bongo bus on an adventure to Albury with his wife, Gwen.